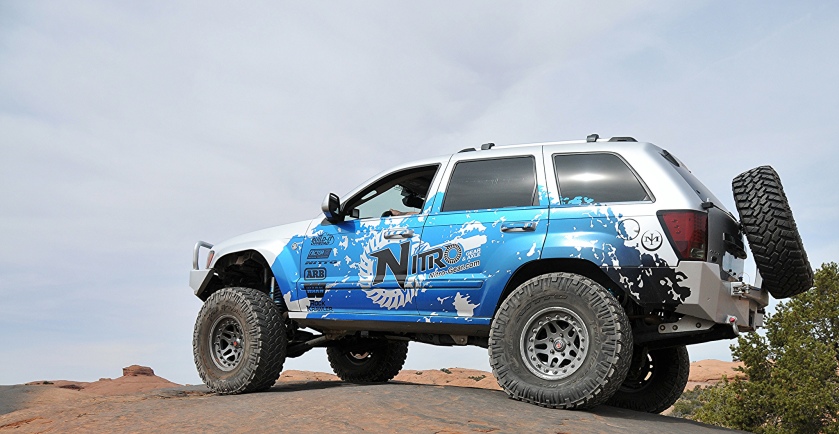 The Nitro Grand Cherokee is kind of a crazy rig. What started life as a grocery getter rig with short travel IFS front suspension, little tires and mostly soccer mom status has been transformed over the years into the rig you see here. Of course, it did have one special aspect, it’s a factory 3.0L diesel model giving it better performance and fuel economy than most of these Jeeps sold in the US. 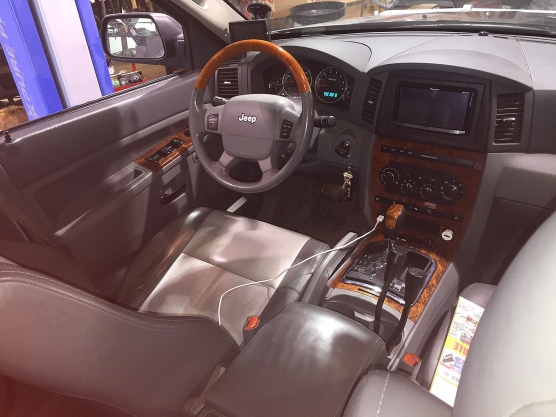 Initially we needed the Jeep as a development rig. We knew we were going to do a 4.10 gear package for the 2005-10 Grand Cherokee and the easiest way to have access to a tester was to buy one. Our silver 2008 arrived at the shop in early 2010 and the first build began. The prototype gears were installed and the transmission controller was custom tuned by AEV to tweak the software for the ratio change and keep the trans shifting properly. King Coilovers, Rock Krawler lift kit, Synergy Sway Bar Links, Synergy Limit Straps and new RCV front axles combined with Radflo 2.5” Remote Reservoir Shocks, Custom Zone adjustable rear control arms, Zone Sway Bar Links, and TJM Coils in the rear gave the Jeep much better offroad capability and some room for bigger tires as well. Needing more traction we swapped the rear axle (this one had Quadradrive2 which limited locker options) for a standard WK 8.25″ rear end equipped with an ARB Air locker. An ARB bumper was added up front along with a Warn winch, some aftermarket rock sliders and a set of skid plates. Hutchinson beadlocks and Toyo M/T 285/75/17 tires rounded build and the Jeep was ready for some trails to go with the daily commute. 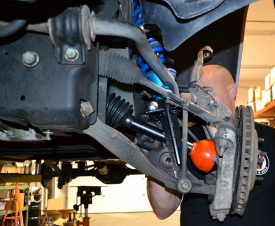 Then Ultimate Adventure (UA) called. If you are unfamiliar with this event it happens yearly and is put on by Petersons 4 Wheel and Offroad Magazine. Basically you live in and out of your truck for a week driving from trail to trail each day and typically covering over a 1000 miles on the road with 4-5 hardcore 4wd trails along the way. It’s a marathon of suffering with bad food, repairing rigs in remote locations and not a lot of sleep along the way. If you go be prepared for the worst and build your 4×4 as well as possible as this is a test of both man and machine at the highest level for recreational offroading. Six weeks before UA we decided the Grand would be the vehicle of choice for the event, but it would need a bunch of mods to handle what would be coming it’s way. Most urgent was the suspension and front axle components as the goal was to fit 37″ Nitto tires and add enough strength to keep everything together for the week of wheeling. With such a short timeline we sent the Jeep off to Build It Offroad in Naches Washington for a one off solid axle swap cutting the IFS from under the front end swapping a Jeep JK Rubicon Dana 44 front axle with Nitro sleeves, gears and shafts and gussets combined with a second ARB Air Locker. Build It then engineered and assembled a custom linked front suspension complete with a JK steering box and HD steering links, King Coil Overs and Currie Anti Rock sway bar. The rear was then lifted higher using 6″ coils from Jeepin by Al.

Even with a lot more lift the wheelwells on this Jeep were just too small to clear the 37’s and major body mods were required. Cutting and radiusing the fenders front and rear, shortening the “returns” on the bullbar to keep it out of the tires and building a custom rear bumper was followed by painting everything body color to make it look right. Hydraulic bump stops were added at the same time all around to smooth things out at speed. 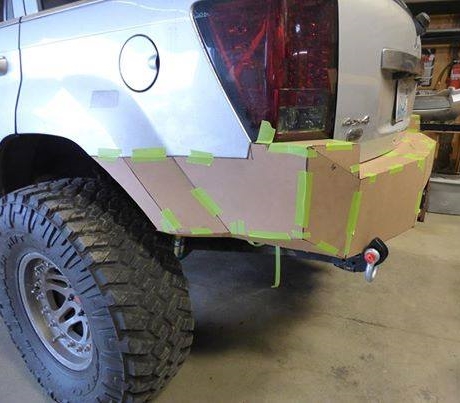 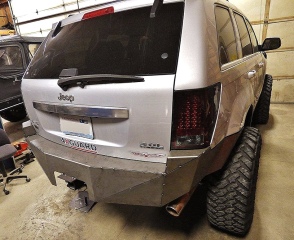 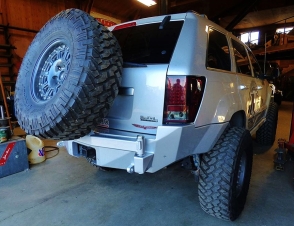 After UA the Jeep kept evolving, we found the rock sliders we were using just weren’t up to the task and would bent up into the body damaging the doors on big hits. We custom designed and integrated a new set welding them directly to the unibody after adding considerable gusseting to keep them intact.  We were also having trouble with a worn T-case howling badly so an 3.0 ratio Atlas 2 was sourced and installed under the Jeep along with new Reel Driveshafts. The complexity of the Jeep meant the factory t-case actuator had to remain bolted above the crossmember and plugged in to keep the computers happy and the transmission from going into limp mode. We’re still looking for a software fix for this issue, but for now it all works as it should. 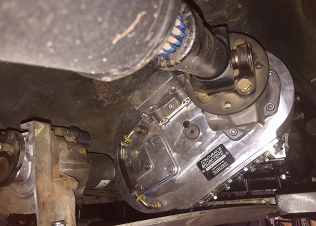 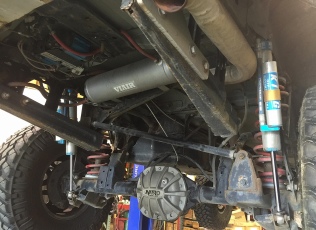 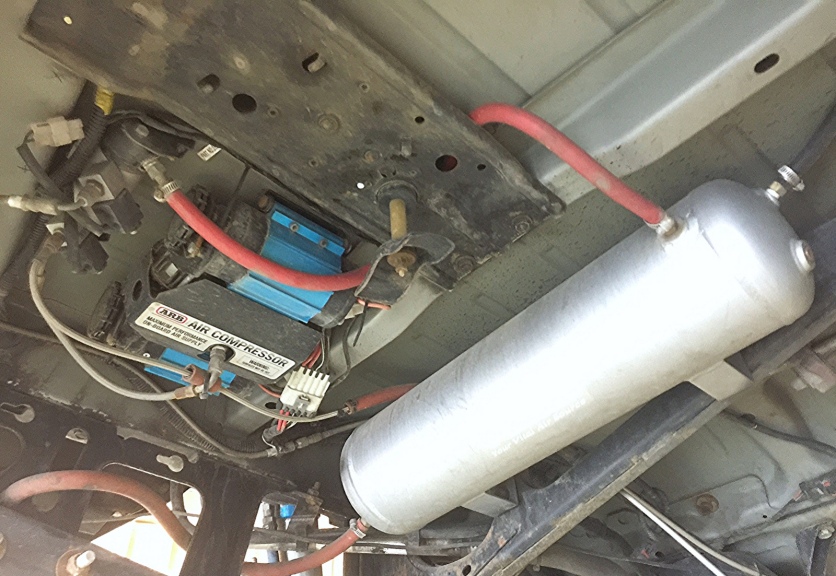 Overall this rig works extremely well and offers amazing comfort in the leather clad interior for long road days and trails alike. It’s been to Ultimate Adventure, Moab several times for Easter Jeep Safari and run the Rubicon twice as well as been on display at the SEMA show. We suspect it’s the most highly modified WK Grand Cherokee in existence and certainly attracts attention everywhere it goes. Different, comfortable and capable. 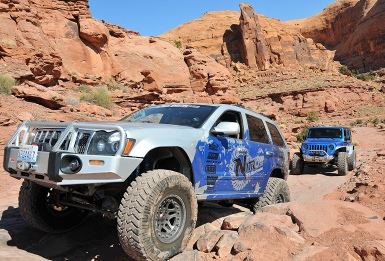 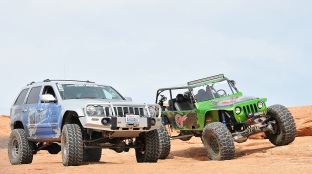 Differential Parts You Can Depend On.

Nitro Gear & Axle strives to provide the highest quality differential components available.  We take the steps necessary to ensure our parts are dependable.  Our product range is continually growing to meet the needs of consumers for new ratios and applications.  At Nitro we know differentials, and know what it takes to provide you with high quality components.                           http://www.Nitro-Gear.com